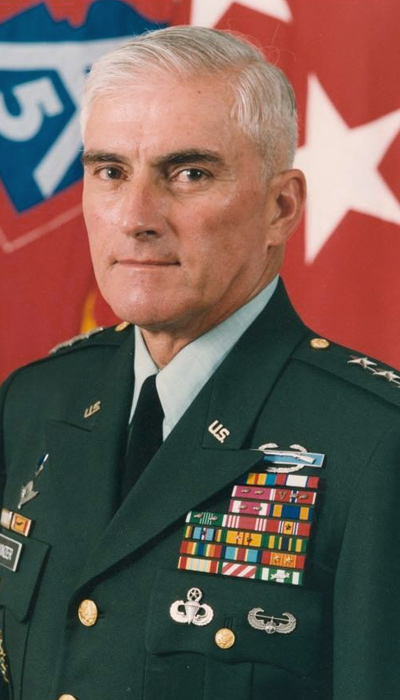 Lieutenant General Joseph W. Kinzer, born 7 July 1939, is a native of Westminster, Maryland. He enlisted in the U.S. Army in 1959 and served at Fort Benning, Georgia; Fort Myer, Virginia; and Europe before being commissioned through the Officer Candidate School (OCS) at Fort Benning, Georgia in 1964. He holds a Bachelor’s Degree in History from the University of Tampa, Florida, and a Master’s Degree in Public Admisntration from Shippensburg University, Shippensburg, Pennsylvania.

General Kinzer is a graduate of the Infantry Officer Candidate School, the Armor Advanced Course, Command and Staff College, and the Army War College. His commissioned service initially included two tours of duty with the 82d Airborne Division where he served with the 1-325th and 2-504th Airborne Infantry Battalions as Recon Platoon Leader, Company Executive Officer, Company Commander, and Battalion S3. His service also included seven months in the Dominican Republic in 1965 with the 82d Division. During two tours of duty in the Republic of Vietnam, General Kinzer served as an advisor to the 7th Airborne Battalion, Army of the Republic of Vietnam, and as Operations Officer and Assistant Secretary to the General Staff of 24th US Corps in DaNang, Vietnam.

From June 1974 to June 1977, he served as a Tactical Officer at the United States Military at West Point. From June 1977 until May 1983 he served with the 101st Airborne Division (Air Assault) at Fort Campbell, Kentucky. While at Fort Campbell his assignments included Executive Officer, 1-506th Infantry, Plans Officer for the 101st Division G3/DPT, Deputy G3, and Commander 2-503d Infantry Battalion from March 1980 to February 1983. Returning to Fort Bragg in November 1985, he served as the G3 82d Airborne Division, and as Director of Operations, XVIII Corps. Following these assignments, General Kinzer returned once again to Fort Campbell in November 1986 to command the 3d Brigade 101st Airborne Division.

Reassigned to the Pentagon in September 1992, General Kinzer served as the Deputy Director and Director of Operations, Mobilization, and Readiness for the Department of the Army at Headquarters Department of the Army until August 1994 when he was reassigned to Fort Sam Houston, Texas as the Deputy Commanding General 5th United States Army. From March 1995 to March 1996, he served as the Commanding General of United States Forces and United Nations Forces in Haiti. Returning to Fort Sam Houston in March 1996, he was promoted to Lieutenant General and assumed duties as the Commanding General 5th United States Army in July 1996. He relinquished command of 5th Army in August 1998, and retired form active duty after serving 39 plus years of service on 31 August 1998.

General Kinzer is married to the former Bonnie S. Booker of Danville, Virginia. They have two children, Joe Jr. of Southport, NC, and Amy Garner of Hickory, North Carolina