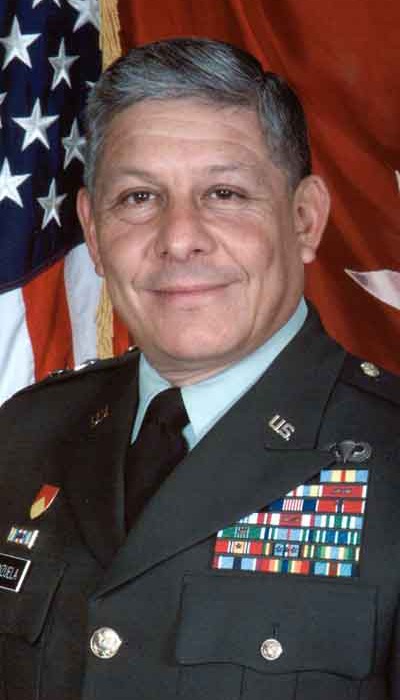 Mayor General Alfred Valenzuela was born in San Antonio, Texas, around 1948. He went to Catholic School, and was in the Cub and Boy Scouts, where he earned the prestigious rank of Eagle Scout. He was interested in the military early in life and joined the JROTC in high school, and the ROTC at St. Mary’s University in San Antonio, where he received both a bachelor of arts degree in government and a master of arts in political science with an emphasis on Latin American studies and national security affairs. He was commissioned there as a distinguished military graduate. He continued his education in the military at the Field Artillery Basic and Advanced Courses, the Defense Strategy Course, the Army War College, the National Security Management Course, and the Airborne Course. He also graduated from the U.S. Army Command and the General Staff College, the Armed Forces Staff College, the Air War College, and the Inter-American Defense College.

After serving in many positions around the globe and working his way up through the ranks of officers, Valenzuela served as the deputy commanding general and deputy joint task force Panama commander at the U.S. Army South. After that he served as assistant division commander (Support) of the 3rd Infantry Division (Mechanized) at Fort Stewart/Hunter Army Airfield, Georgia, from October of 1996 until June of 1998. In 1997, he became a one-star general.

He received his second star in 1998 and in June of that year was made deputy commander in chief of the U.S. Southern Command, based in Miami, Florida, which had relocated from Panama in 1997. The Southern Command oversaw military operations in Latin America and the Caribbean, except Mexico, working, in recent years, on anti-drug efforts, disaster relief, preserving stability, and countering threats to vital U.S. national interests, as well as assisting friendly nations within its area of responsibility

Mayor General Valenzuela from 2000-2004 became the US Army South Command in General. In total he served thirty-three years in the US Army and was highly decorated for heroism and valor. He served in three combat corps and six Infantry Divisions all over the world including Peru, Korea, Colombia, Turkey, Haiti, Puerto Rico, Kuwait, Grenada, Panama, Germany, El Salvador, and Somalia, as well as numerous years in interagency assignments. He commanded in the Cold War and Gulf War eras, and was awarded the two highest peacetime awards upon his retirement, the Defense and Army Distinguished Service Medals.

After retirement, he continued his public service by creating an educational foundation for at-risk children and for the families of soldiers killed in the line of duty. He has or now sits on several community boards of directors; Boy Scouts of America, Family Service Association, Boys and Girls Club, Communities in School and Haven for Hope. He is an Eagle Scout himself and was inducted into the Boys and Girls Hall of Fame. He sits on the National Board of Directors for St. Mary’s University, Philips, Tomas Rivera Policy Institute, National Recreation Board of America. He is a senior consultant to the Center of Terrorism at St. Mary’s University School of Law, where he was recently named a Distinguished Alumnus.

A former San Antonio Housing Authority President/CEO; he also served as Executive Director to the Housing Authority of Bexar County. He is President/CEO of M.C. Valens; a service disabled veteran owned business. His company previously advised the senior Mexican leadership on the War on Drugs. He is a motivational speaker, and supports the US Army in the arena of recruiting, retention & diversity issues. Hispanic Business Magazine has named him one of the 100 most influential Hispanics in the U.S. The Valenzuela Family’s published book entitled “No Greater Love: The Lives and Times of Hispanic Soldiers” has won numerous awards and all proceeds go to the families of the 21 Soldiers he buried from the Iraq and Afghanistan wars. Both he and his wife worked at USAA from 1967-1970.}

He recently served as a Board of Director of USAA Federal Savings for 11 years, (risk/trust and credit committees), USAA USB Bank (Credit card bank/risk/compensation committees). He was also recently appointed by the President of the United States Barrack Obama to the WWI Centennial Commission.